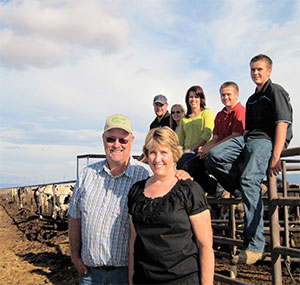 How a New Mexico Dairy Is Surviving Tough Times

New Mexico father-and-son dairymen Ron and Dale Jones began growing more of their own forage six years ago. It was a smart move and good timing, considering the current high feed prices. In fact, it's proved to be their ace in the hole lately.

"We're doing it out of necessity," Ron explains, as he takes a break from cutting green chop on a September morning — something he's done every day since April 17, starting with wheat hay, then alfalfa and corn silage. "Raising your own forage is much cheaper than buying it."

The practice gets high marks from the Joneses' lender, Ag New Mexico, which provides them with operating credit. "Jones Dairy is one of the higher performing operations in the region," says Warren Russell, their relationship manager. "There's little forage grown in New Mexico, and even less grain. The drought in the Midwest really increased the price of corn. Growing more forage helps the Joneses succeed." Robert Hagevoort, an Extension specialist known as the Dairy Doc at New Mexico State University in Clovis, says area dairy farmers started growing more forage 10 years ago, and the trend is heating up.

"Many farmers now grow somewhere between 50 to 100 percent of their forage needs," Hagevoort says. "It is one of the reasons why California dairies have relocated to other states with ample and affordable farmland, such as New Mexico and West Texas."
Hard Work Comes With the Territory
The Joneses doubled the size of their milking herd from 1,500 cows seven years ago, when they installed a rotary milking parlor, to 3,000 cows today. Between growing forage and milking, it takes 46 employees to keep the Veguita, N.M., operation going.
Ron's dad, D.C., now deceased, started Jones Dairy more than 50 years ago, and the family has always grown some forage on the home place. In 2006, Ron and Dale bought a farm near Estancia, which they irrigate with well water distributed via pivots.
Three years ago, they leased more land closer to home, which they furrow-irrigate using water that flows through canals from the Rio Grande River. "Furrow is more labor intensive, but it's more cost effective because it takes less electricity," Ron says. New Mexico experienced drought in 2011 and, to a lesser degree, in 2012. "We're short on water here along the Rio Grande. The rains came just in time this summer."
In all, the Joneses farm about 3,000 acres. When asked if farmland is affordable in their area, Dale and Ron answer with a resounding "No!" Land near Estancia is more reasonable; that's why they were willing to farm it, even though it's 50 miles northeast of home.
Rio Grande Valley property sells at higher prices than most farmers are willing to pay, partly because it's green and beautiful. That's why the Joneses lease their new land in the valley. "You can't make buying land pay here," Ron explains.
Thinking Smarter to Outlast the Drought
In addition to growing some of their forage, the Joneses purchase a large amount of their hay and all of their grain. Last year, the drought made hay scarce. Ron traveled as far as Colorado seeking alfalfa, which sold at an all-time high of $310 a ton. This summer, the alfalfa price dropped to 270
— still high, historically — and corn hit a record $8 a bushel.
"We're one of the few dairies in New Mexico to feed green chop all summer," Ron says. He planted a large acreage of corn last spring, thinking he'd harvest some grain. "But when it got down to it, we fed most of it as silage," he reports. "We sold some silage to buy grain."
Considering the current high grain prices, the family's animal nutritionist suggested cutting back on the amount of grain they feed. Ron disagrees. "Some who've cut back on grain aren't producing as much milk. I want to keep production where it is now. I'd rather cull cows that aren't productive."
The Joneses owned some farming equipment when they bought the Estancia farm, and added newer, bigger machinery as they could afford it.Offsetting that expense, they spend less on fertilizer than farmers without dairy cows, because they can apply manure as a soil nutrient.
As for the future, Dale says, "I used to want to keep expanding. With today's high input costs, I'm not so sure. But we're better positioned now that we're more diversified."